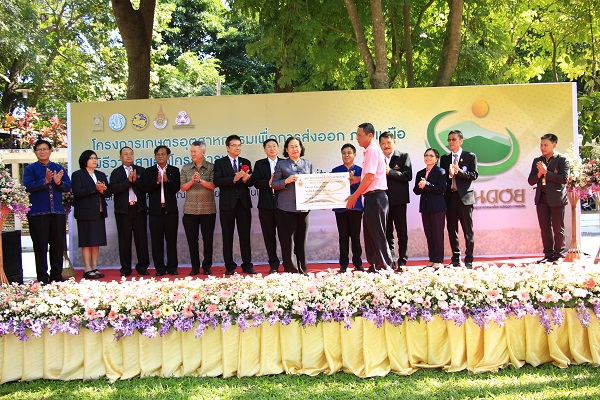 18th January 2018, RMUTL celebrated the 13th established anniversary, grand opening the project and the 1st Smart Farmer University for solving agricultural problem, promoted, and upgraded the product toward future food by Miss Doojduan Sasanavin the Deputy Permanent Secretary of Agriculture and Cooperatives as an opening speech of the project

Asst.Prof.Prapat Chuechai acting for president at Rajamangala University of Technology Lanna revealed that this project is the project which adapted from TAK Model. To enhance the agriculture to the agricultural exports. At the end of the year 2018, RMUTL and other departments which are farmer, other northern university, the Federation of Thai Industries Northern chapter operated the project together to solve the agricultural problem, enhancing economy, social, and farmer’s product.

RMUTL Smart Farmer University is the activities which operating under The Agricultural Industrial Export for Northern Thailand project to develop Thai farmers to the agro-ecosystem managers. There were ten principles supported learning without teaching. The farmer is a professional and uses their farm for learning and experience integration field. The study of analysis ecology of agriculture industry was compared and brings to learning for teamwork to participate in indicating and evaluating. Leader by 5 plants 5 provinces consist of Gros Michel Banana, Pineapple, Mango, Ginger and Okra. Smart Farmer University has divided the course into 2 types namely beginner course and professor course which consist of future trade marketing, Agricultural production system, Production Technology and Process Quality Operation.  However, Farmer who has finished training course will receive a certificate of learning and can bring it to submit for transfer subject studied and experience from informal education which is the rules of university set said by the Acting for President of RMUTL.

This project applied from the Royal Project of His Majesty King Bhumibol Adulyadej to move forward with self-sufficiency and safe product produced in concept under the Branding " Suan Phan Doi " that means the Garden was built for in Remembrance of His Majesty King Bhumibol Adulyadej. Not only create the new knowledge to transfer to student and institute, but also connect the product to the nation and international market.

RMUTL welcomed professors and students from...
12 academy has cooperated to make relationship in...
Latest News
Category